The Case of the Mezuza 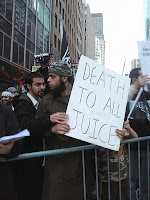 Rabbi Weiner was stopped in the hallway the large apartment complex by a Gentile woman. "Rabbi, could you please come up to my apartment to check the mezuzah?"

Thinking he'd heard incorrectly, he asked the woman to repeat her request.

"I know you think it's strange, considering I'm not Jewish. But my Jewish friends told me if you put one of those mezuzahs on the doorpost, nothing bad can happen to you. They also told me it has to be checked by a rabbi twice in seven years."

Rabbi Weiner unscrewed the mezuzah case, took it off the wall, and looked inside, but there was no parchment. "Uh, was there something in here when you bought it?"

"Yes, there was. But I couldn't read the instructions, so I threw them away."

(Excerpted with permission from Major Impact! - 285 Short Stories with an Immediate Message from Targum Press)


Some mezuzah trivia for your table...
What’s written on the parchment inside a mezuzah?
On which doorway(s) of the house are mezuzahs affixed?
When you sell your house, what about the mezuzahs - part of the house or personal property?

PS – if you’d like my free 1-page sheet on mezuzahs, send an email.

I am launching a new email list for married men. Let me know if you'd like to join.
Posted by Rabbi Seinfeld at Friday, January 30, 2009 No comments:

Email ThisBlogThis!Share to TwitterShare to FacebookShare to Pinterest
Labels: mezuza

For Whom the Bell Plays

This week: a provocative story and a question for your table.

(as always, try printing and sharing at the dinner table)

Have you ever stopped to listen to a street musician? Have you ever not stopped? How do you decide when to stop, and for how long?

It was a cold January day in Washington. Typical Friday morning rush hour.

A good-looking man in jeans and baseball cap emerged from the metro at L’Enfant Plaza and opened his violin case near a trash can.

He threw in a few dollars from his own pocket, then began to play.

For the next 43 minutes, he played six songs by Bach. During that time, 1,097 people passed by on their way to work.

Only one of those who stopped recognized that she was face-to-face with Joshua Bell, one of the most celebrated musicians in the world. Typically, people are willing to pay $100 or more to hear him perform (and that’s for average seats).

He was playing his $4 million Stradivarius.

In the Washington Post’s story about this event, the journalist noticed that “every single time a child walked past, he or she tried to stop and watch. And every single time, a parent scooted the kid away.”

Here is the Post’s Pulitzer Prize-winning story: “Pearls Before Breakfast”.


Here is a bonus - Bell does Beethoven:

Posted by Rabbi Seinfeld at Friday, January 23, 2009 No comments:

In memory of Eidla bas Avraham Yonah, who lived to the age of 95, as sharp as she was growing up in Memphis. She was a role model for the idea that you're never too old to learn something new.

If you missed last week's post on the war in Gaza, see the "Here, Israel" link to the right - including how to "adopt" a soldier.

I was in San Francisco this week and someone wanted to know: What is the Jewish view of the new leadership in Washington?

The question reminds me of a story, my first day teaching public school in rural Mississippi.

Fresh out of college on the West Coast, I'd never been to the South before. Some of my mostly-black students were suspicious of me for my whiteness as were some of my white neighbors (for my choosing to teach black students. (Most were just surprised that an outsider had taken interest in their little corner of the world.)

For example, I once heard through the grapevine that some folks were talking about me because they saw me talking in a friendly way to a certain black person in the grocery store.

Similarly, once I had to call the father of one of my more challenging students in to school to discuss his son's behavior. His son, Toby, was rude to me and often refused to follow directions. The father was six-foot-two and spoke with a deep, slow voice. He came in wearing the dusty clothes of a lumberjack. had to take time off from his low-paying job, and this displeased him.

He spoke to me so deliberately it sounded like he was putting a comma between every word, "I, hear, you, are, too, hard, on, the, children."

It is no accident that Jewish people have been at the forefront of civil rights movements around the world. We should look at Obama's presidency as a great victory for Jewish values. Our vision of leadership is a meritocracy, period.

Or that's the way it's supposed to be at least.

Here's a mini Talmudic story you can tell at your dinner table:

On Yom Kippur, the High Priest used to make a giant break-the-fast feast. Everyone knew and believed that what he did in the Temple that day was on their behalf. So when he came out successfully, the crowd would cheer and escort him. Remember, the High Priesthood can only be held by a direct male descendant of Aaron, Moses's brother. No one else need bother apply.

One Yom Kippur, while being escorted by such a crowd, there was a sudden commotion through the crowd, and all of the people suddenly abandoned him to follow two scholars who had been seen passing down a side street. These were not just any two scholars - they were Shemayah and Abtalion, the greatest of the generation. And they were both descended from converts.

Question for your table - how do you interpret this story? What does it say about merit versus peerage?

(Question for children: How do you decide whom to be friends with? How do the other kids in your class decide?)

I was in record warm weather in San Francisco this week, to return to weather so cold it feels like we're headed for a record low. But things are supposed to warm up next week in Washington...

PS - sometimes we combine scholarship and royalty - have you heard of the royal rabbi from Swaziland? See also rabbigamedze.com.

Here he is telling his story:

Posted by Rabbi Seinfeld at Friday, January 16, 2009 No comments:

4 ways to help, and one piece of table-talk quality trivia...

(as always, you are encouraged to print this blogand share it at the table)

To "adopt" a soldier - ie, receive an individual soldier's name to pray and/or do other good-karma acts on his or her behalf, send an email to "Office of Rabbi Kook, Rehovot"
Posted by Rabbi Seinfeld at Thursday, January 08, 2009 No comments:

Have you ever cried tears of joy?

Why does joy cause tears?

Why does anything cause tears? (other than eye irritation)

No other animal, not even primates, cry emotional tears.

We have a two-year-old, Devorah, who starred in my recent videos (did you see her last week?)

She turns 3 next week. She can gush tremendous rivers of tears one minute, then be laughing the next minute. But she does not cry tears of joy.

Tears of joy seem to require an adult sense of self-awareness.

William Frey, a biochemist at the University of Minnesota, proposed that people feel "better" after crying, due to the elimination of hormones associated with stress, specifically adrenocorticotropic hormone (Wikipedia).

Someone suggested to me last night that tears of joy are really tears of sadness that were waiting to be released.

Do you know anyone who has been dragging their feet at making a decision that they know would lead to greater happiness?

Is it possible they are afraid of being truly happy?