The goal of this email is to turn the dinner table into a "deep-talk-table"... Please print and share.

There are a lot of things to be afraid of in this world.

Especially if you read the news.

Many of these fears have offical names:

Fear of fear itself is called phobophobia.

One of my kids seems to have lachanophobia — fear of vegetables.

Interestingly, there is no official name for "fear of mudslides" but perhaps it's included in alpinephobia.

Question for your table: Can you guess what someone suffering aibohphobia is afraid of?

(Hint, it's a joke; unlike arachibutyrophobia – fear of peanut butter sticking to the roof of the mouth — a term invented for a Peanut's strip but now evidently taken seriously.)

This time of year, a lot of people develop Pesachphobia, also known as haggadaphobia and sometimes referred to as sederphobia.

As a remedy for this irrational fear, I'm pleased to announce the publication of the fully-revised 2014 edition of the Art of Amazement Haggada.

This email is going out late because I was hoping the new edition would be available today. Alas, it's ready but not available online ... probably won't be available until Sunday. But that should still give you time to get it for this year's Seder. I hope and believe you will enjoy it. Please forgive me in advance for the extra email that will go out then...

In the meantime, I'll leave you with a final question for your table:

Where does fear come from?

PS - My "Judaism, Christianity, Islam" seminar is now online: https://www.youtube.com/watch?v=YpRNpMr2-4U
PPS - Our public service site bestjewishkidsbooks.com has been stocked with links to great Pesach books and gifts, even matzah!
PPPS - Enjoyed this email? Like it, tweet it, or just share it with someone who might enjoy it.

It's a Big World After All

The goal of this blog is to turn the dinner table into a "deep-talk-table"... Please print and share. 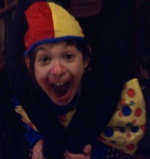 The picture to the left gives you an idea of how we started our week.

But the week's news has dragged us out of our narrow shell.

1. They STILL can't find the airplane? It just disappeared?

2. The Russian empire strikes back?

Let's start to make sense of all of this with a question for your table, and then we'll get to the airplane.

(I never heard someone say "medium".)

OK, with that in mind, let's talk about the airplane and those 239 people on board. 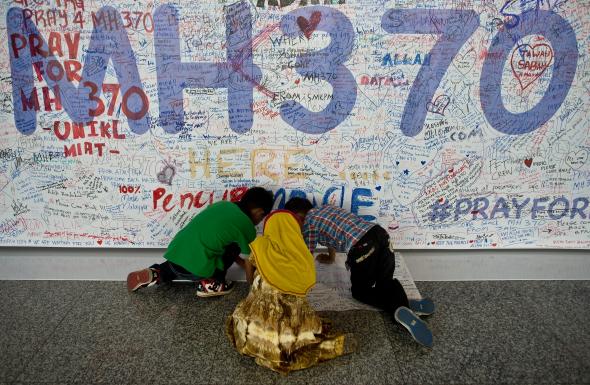 How many of us feel or felt a bit baffled by the fact that hundreds of ships, airplanes and sattelites can't find this Boeing 777?

The problem is that we just don't get how big the ocean is.

It's really, really quite big.

And what's even more counter-intuitive is that the vastness of the ocean is just a thin skin on the surface of Planet Earth. 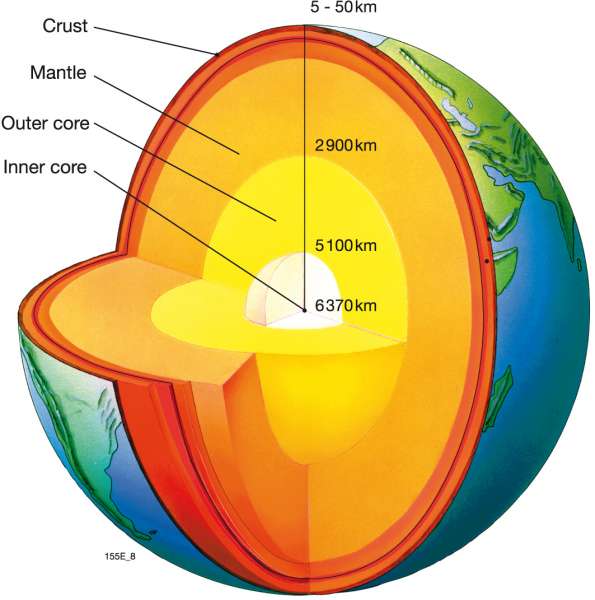 You and I are tiny little specks of nothing compared to the Earth.

Now, every school child know that the Earth is quite small compared to the sun.

How many earths could you fit inside the sun? Want to guess?

The sun is of course one of a group of suns.

Any idea how many suns (stars) are in the Milky Way Galaxy? 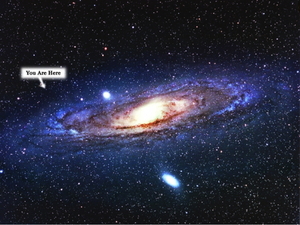 More than a million.

More than a billion.

At least one hundred billion.

And most of that is vast regions of empty space!

And thanks to the Hubble Telescope, we have an estimate of how many galaxies are out there.

The current estimate is about a hundred billion or so.

So do the math. Based on those numbers, how many stars should there be in the universe?

Does that seem big?

Is "big" the appropriate word here?

How about "gigantic"? "Humungous"? "Ginormous"?

Yet here we are, little specs of nearly nothing on the outer crust of our tiny little blue space ship near the outer edge of one galaxy.

And we're still fighting each other over ownership of every inch of that crust.

As Kurt Vonnegut said, our problem is that gravity has created a situation where every human being needs some part of the earth to cling to.

So now we can get to today's main question for your table:

Why does any of this matter?

PS - My "Judaism, Christianity, Islam" seminar is now online: https://www.youtube.com/watch?v=YpRNpMr2-4U
PPS - Our public service site bestjewishkidsbooks.com has been stocked with links to great Pesach books and gifts, even matzah!
PPPS - Enjoyed this email? Like it, tweet it, or just share it with someone who might enjoy it.

The goal of this blog is to turn the dinner table into a "mitzvah-table"... Please print and share.
In honor of our dear daughter Emuna (our California girl) who turned 12 this week and became a Bat Mitzvah.

This week is a special Shabbat called “Shabbat Zachor”.

Why is it called that? What does it mean?

Remember what Amalek did to you on the way, when you were going out of Egypt.

This is one of the 613 mitzvot — to remember what Amalek did to us.

What is it that we are remembering? Why is it important to remember this?

That they ran into you on the way and they cut you off, all the weak ones after you.

“After you” means stragglers. There was one group of people among the Bnai Yisrael (Children of Israel) who were straggling behind everyone else. What does it mean they were straggling?

There are two meanings for the word “straggling”. It can either mean physically straggling­, physically left behind.

Or, it can mean spiritually straggling – lacking in godliness or awareness of God (yirat Shamayim).

Here it makes sense that it means both, that part of Bnai Yisrael were both (a) lacking in Yiras Shamaim and (b) physically left behind.

And you were tired, and wiped out, and he did not fear God.

Who is this HE that did not fear God? Is it talking about Amalek? Or the Bnai Yisrael...?

Rashi says “he” means Amalek because of the vowel under the “yud”, a “kumutz”, which makes it a verb “he did not fear Hashem”. We usually refer to Amalek as “he” and to Bnai Yisrael as “they”. To make it an adjective, you would have to change the “yud” to a “sh’va.”

Chizkuni says “he” means Bnai Yisrael. Bnai Yisrael didn’t have Yiras Shamaim so it was their fault that Amalek attacked.

On the one hand, Rashi makes sense. It was Amalek because after they saw Bnai Yisrael cross the סוף ים-the sea and all the nissim-miracles they saw Hashem do, they still didn’t fear Him?

So it was the stragglers’ own fault that they were straggling. But was it their fault that Amalek attacked?

It seems to me that it was because of the rest of Bnai Yisrael that Amalek attacked, because they weren’t helping the straggling ones. They should have helped them, physically and spiritually.

We learn from here that if there is anyone who is straggling, we should reach out to any chance we get to raise them up and hopefully prevent Amalek from ever attacking us again.

This Shabbat – and every day – we should remember that it is our own responsibility to prevent Amalek from attacking, by making sure we take care of our own stragglers.

Is Selling Simple? (This guy says so...)

In memory of Yehuda ben Yaakov - Karl Bach - whose yahrzeit was this week.
The purpose of this email is to promote greater connections at the Shabbat table... Please print and share 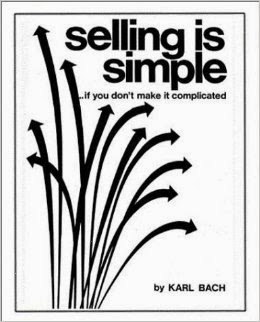 His only professional training had been in his father's butcher shop in Germany.

When he landed in New York, he found his training useless. No union card, no work.

That's what he did. All the way to California.

Evidently the Fuller Brush Company either saw something special in this twenty-year-old immigrant who spoke broken English or else they were desperate for salesmen.

Or perhaps it was a match made in Heaven.

For Bach's part, he was perhaps lucky he arrived a decade before Arthur Miller's Death of a Salesman could dissuade him.

For in two months he became the most productive salesman Fuller had ever had.

With either innate genius or divine inspiration, he rejected much of the received sales wisdom and developed on his own irresistible techniques.

He then applied those methods and insights to the life insurance business.

Within three years, he became one of the most successful life insurance producers in the United States of America.

Fortunately for us, he decided to share his wisdom on selling - and human nature - in a wonderful book, Selling is Simple...If You Don't Make it Complicated. (Here's the amazon link.)

The first part is called, "Selling is never work - it is fun".

Hard for me to get past such a title. Hard to imagine selling being fun. I hate selling.

But as I read the book, I started to see his wisdom emerge as a very Jewish theme.

The whole book seems to revolve around Chapter 7 -  "Who Will Be For Me If I Am Only For Myself? Thus said Hillel, a great Jewish teacher"

There, Bach declares that "selfish thinking (hatred, jeaslousy, greed, dishonesty - indeed everything negative - are the greatest enemies ofeman who wants to excel and succeed."

Strike the word "salesman" from that sentence and substitute "person".

Let's skip to the conclusion and listen to this gem:

"What greater reward in life can there be than to make others happy?....If you can enjoy helping people, regardless of what they do for you, this too will help you to grow - not only in business, but as a human being....But never expect perfection. Never expect Utopia. It can never come. Just as there is rain and snow as well as sunshine, you have to keep in mind that beyond the clouds, the sun is always shining" (p. 176-177).

For your table, here are Bach's "Ten Challenges" - try asking these at your table: