As Fast as You Can

The purpose of this blog is to bring zerizut to the Shabbat table. Please forward / like / tweet or just print and share.
In memory of R' Shlomo Gardner who passed away last week.

If you take your five thousand steps
the way I did the other day
in a five-kay race,
and you move those legs
as fast as you can,

You will start in a run
and then shift down to a jog
and then slow to a trot
and you will ask yourself,
"Is this really, truly
as fast as I can?"

Up and up, bend after bend, then
enjoy the long descent
until you realize you've only gone halfway
and now need to do it all again, always
as fast as you can;

And by that second up and up, bend after bend
if you are like me you start to wonder
whyfore are you here
when you could be weeding the garden
or plucking your eyebrows —
anything would be more fun than running in the sun
as fast as you can.

"Isn't it for a good cause? What's the charity again?"
No room for noble rumination
when a tortured body needs full concentration
to reach that finish line
as fast as it can.

Pale youths politely pull ahead (as they should)
but then a bearded old guy in a suit and tie passes you by —
Why the schtick? What's on his sign?
"It doesn't matter how fast you run; it does matter how slowly you eat."
Thanks, Rabbi. Is that a dispensation not to run
as fast as I can?

Your kids are going to wonder
why you pushed yourself so hard
and you merely need explain,
"it was a race," which of course means you go
as fast as you can.

The fitness folks today are on the same page,
distance and duration are on the out and out
but short sprints are on the up and up
and what gets you round the ageing bend
is of course to run (or walk or swim)
as fast as you can.

To the rabbis who didn't run
because "one man's torture is another man's pleasure":
You say good health is a gift
but isn't taking care of your health a mitzvah
rewarded measure-for-measure,
as best as you can?

If you run like this rabbi
then a 5K is the same
as going to work
as loving a wife
as raising a kid
as controlling a temper
as avoiding a temptation
as being happy
when you ask every day
(I do hope you ask),Am I just trotting through life
or am I doing
the best that I can?

Question for your table: Does the effort bring the reward, or does the reward cause the effort?

You Want a Revolution

The purpose of this email is to bring the Friday-night dinner table full-circle. Please forward / like / tweet ....
In memory of my grandmother, Yehudis bas Alexander, whose yahrzeit is tonight. 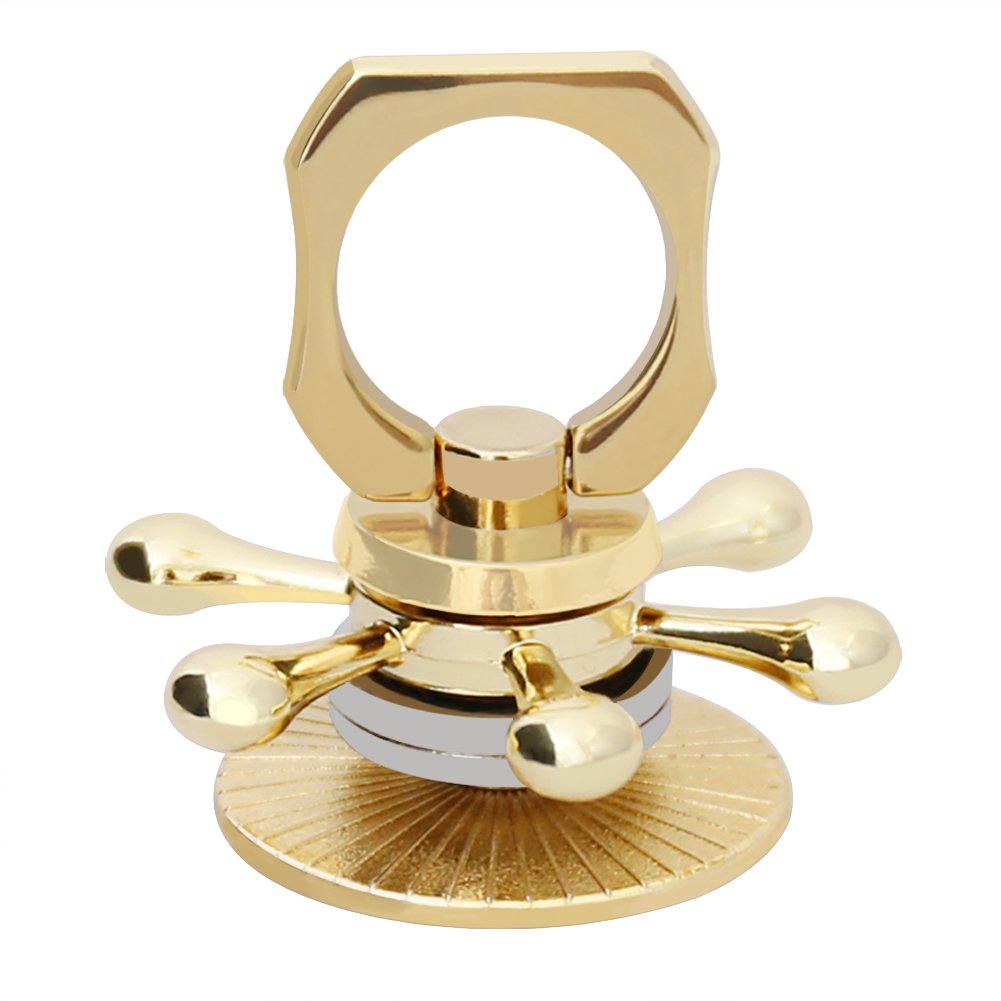 Here's a great question for your table tonight:

If you want to say, "Short-lived fads that made somebody a millionaire", that would be to easy.

Why were they fads? What do they have in common?

Notice how they're all versions of the same basic idea: a round object that can be moved in a circle, used to pass time.

Notice also how they shrink over time.

The hula-hoop was trying to address a problem: How do you get people who don't want to move, to move?

It turns out that hula-hooping takes a lot of effort and practice.

So they said, if you're not going to move your whole body, how about at least your arm?

In comes the frisbee.

But that's a lot of effort, and requires you to actually go outdoors.

In comes the yo-yo.

But that didn't last long - it too takes time and effort to get really good at it.

(And it turns out that yo-yoing is an artform.)

And finally someone thought, maybe we could at least get them to move a few fingers.

In comes the spinner.

The reason spinners are going to disappear about as quickly as they appeared is because they are too easily lost or forgotten.

But that's OK. Because we can see the trend and predict where it's going.

Notice the progression — hula-hoop, frisbee, yo-yo, spinner — not only are they reducing the amount of your body and effort needing to be involved, they are shrinking in size.

The next fad - you read it here first - is going to be the spinning ring.

Rhetorical question for your table: Will it solve the problem? (of course not)

I recently participated in an online conversation with a group of people comparing hiking in nature with playing video games.

Question for your table: Is there any comparison?

The video-game fans were annoyed and sometimes livid that anyone would suggest that sitting there gaming for hours and hours is not true happiness.

This problem was raised in 1964 by a couple of Jewish guys:

By 2015, another Jewish guy was declaring that it's still a problem:
(Yes, believe it or not,  he's really quite Jewish.)
But just last week, some more Jewish guys seem to have found the solution, and guess what? It's really quite old:

(Hope you enjoy that as much as I did.)

Question for your table: Is the latter a true revolution?

The purpose of this blog is to bring some tête-à-tête to the dinner table. Please forward / like / tweet ....
In honor of 3 anniversaries: Marc & Lily, Joel and Lisa....and ours.
And happy birthday to Elliott in SF.

Today's lead question for your table: When are two heads better than one and when are they not?

This two-headed porpoise was caught recently in the North Sea.

(And if you think that's weird, you should see some of truly ghastly mosters living down there.)

Can we agree that this is this is a case of two heads not being better than one?

So when are two heads better than one?

How about solving a problem.

For example, here is a Daniel Kahneman problem that very, very few people can solve on their own. You can try it, but chances are you'll need to talk it out with someone:

On their own, over 70 percent answer C.

On their own, they cannot fathom why A is the correct answer.

Try working together to see if you can understand why the correct answer is A.

Moving beyond problem-solving, pop-philosopher Alain de Botton is a big fan of that classic 2-headed arrangement known as marriage.

He argues that marriages are often on the rocks not because we married the wrong person but because we never learned how to love. In his brilliant lecture, he urges married people to do two things:

1. Change the way you respond to imperfection
2. Rather than look at compromise as a necessary evil, embrace the "nobility of compromise"

Speaking of compromise, and speaking of two heads, one of the most noble compromises a couple can make is to eat similar foods, especially when it comes to the pungents.

In other words, if your partner eats garlic, so should you.

The purpose of your marriage is to travel the road together.

If she goes the garlic route, so should you. The evenings will pass so much more happily.

And you will finally understand the deeper meaning of "two heads are better than one."

Question for your table: Is there some wisdom here? Or has the rabbi finally gone mad?

The purpose of this blog is to whet mental appetites around the Friday night dinner table. Please forward / like / tweet ....
In memory of my grandparents, Lester and Sylvia Seinfeld (zichronam livracha) whose yahrzeits were observed this week.

This is something I witnessed this week in my very own home.

Did you ever witness something like the following in your home?

Child is staring into a full fridge.

Child complains: "There's nothing to eat!"

Is something wrong with this picture?

The parent sees this: 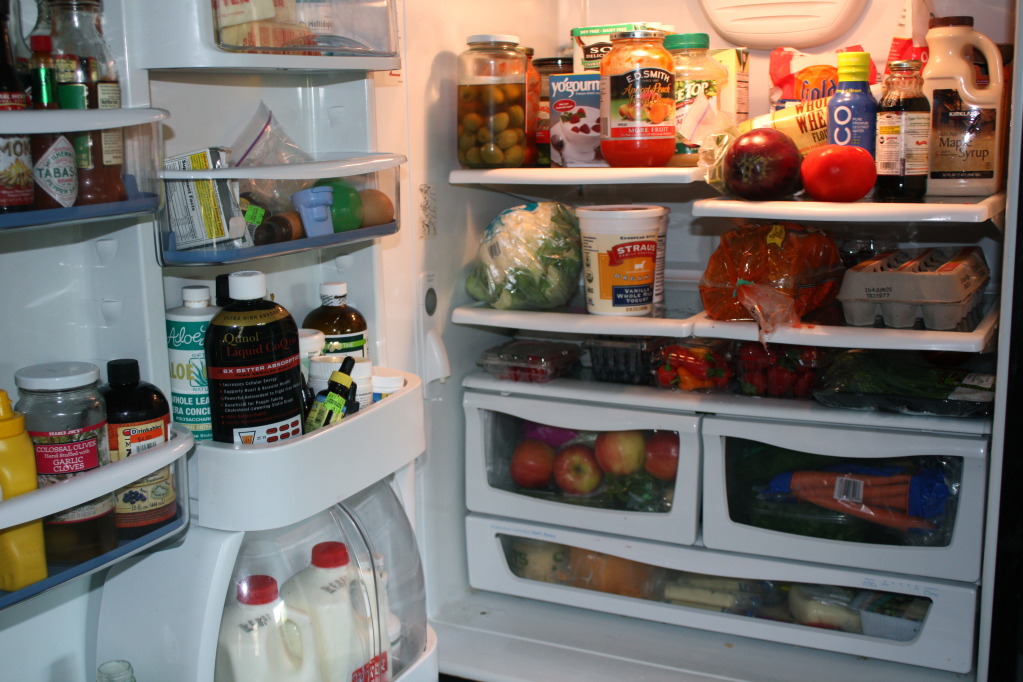 But somehow the child sees this:

First question for your table: How does this happen?

I think the disconnect may be explained by a related scenario:

Second question for your table: What's the difference between hunger and appetite? 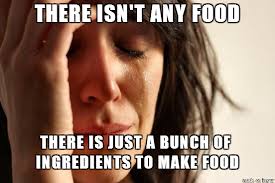 PS - There are 4 hidden links in this post. In addition, I recently bought this and recommend it.