This is an repost, with a few changes, of a Table Talk I first posted a year ago. It generated a lot of interest then and I have so many new subscribers, I hope you enjoy the encore. 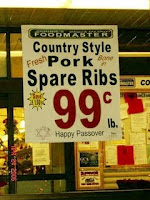 A few years ago, I was teaching a walk-in class in Seattle. The participants looked like a cross-section of mainstream Seattle.

The class was about the intersection between the mundane and the mystical. At one point, I asked, “Who knows the bracha to make on pork chops?”

“That’s a trick question,” a young lawyer answered. “You don’t make a bracha on non-kosher food!”

“Ah – but what if someone were starving, and the only thing they had to eat was pork chops? If they need it to save their life, then pork becomes temporarily kosher!”

Afterwards, an older lady came up to me with a word of protest. She was friendly but quite driven. “I’m a survivor of Auschwitz,” she said. “After we were liberated, we were starving. There was some non-kosher meat, and we ate it. But we would have NEVER eaten pork!”

First question for your table: What is it about pork?

Keeping kosher today ain't what it used to be, nor is it what it could be.

On the one hand, it's so easy now. Walk into any Safeway and you'll find that little O-U symbol everywhere. Trader Joe's even publishes a list of their kosher products.

On the other hand, there aren't very many kosher restaurants, and very few great ones.

I used to associate "kosher" with being "religious". A little bit fanatical. But then again, I used to think someone who strictly reported every penny of income or stringently avoided gossip was also a bit fanatical.

Second question for your table: If, as Hillel said, the essence of the Torah is how we treat others, how does “kosher” fit in.

Once upon a time someone promulgated a myth that the kosher rules are based on health concerns. Pork and shellfish can carry diseases, right?

The problem with that logic is that lots and lots of ancient people ate pork. If the Jews had some kind of health secret, wouldn't word have leaked out? The Romans were ruthless, but they weren’t dumb.

In fact, it was only when the early Christians (who were Jews) discarded the kosher rules that they were able to attract Gentile converts. If it were about health, they should have just told the potential converts, "You'll live longer if you keep kosher!"

It took me a long time to figure out this whole kosher thing.

It's really quite simple: The idea of kosher is training yourself to think: "You can't eat everything."

In other words, you're not an animal. If you want to reach your fullest spiritual potential as a human being, train yourself not to eat like an animal, i.e., not to eat everything. (Based on this, even deciding to avoid a single food for kosher reasons - such as pork or whatever - without keeping strictly kosher - even a small choice like that would be spiriitually meaningful.)

(Last year I mentioned that there is an esoteric teaching about pigs becoming kosher in the Messianic age. Several people emailed me for more information and are still waiting....This time I will do so more promptly so email me if you'd like the details.)

In memory of the Fogels.

In case you were distracted by civil war in Libya, the disasters in Japan and your own life in general, there was a great tragedy last Shabbat in Israel. An entire family, parents and small children, were murdered in their sleep.

The community of Itamar is of course a "settlement".

But what does that mean?

From the perspective of Hamas, every Israeli community, including Tel Aviv, is a "settlement".

From the perspective of every anti-Semite, every Jew worldwide is a "settler".

Question #1 + 2 for your table: Do you ever feel like a settler in your life? Is this good or bad?

In this case, I happen to have known the deceased. She was a shining person whom one remembers first and foremost for her smile. One of her grandsons told me today that this trait was not newly acquired - that even as a child, people called her "the girl with the million-dollar smile."

What are you going to do about it?

PS - in honor and memory of the slain Fogel family, 20,000 people signed up on Facebook to light Shabbat candles tonight. Click here to join.

PPS - here is a video in memory of the Fogels...

PPPPS here is a poem written by a friend of ours who happens to be a neighbor of the Fogels:

I know, it's not new news
my Bubie saw her parents murdered in front of her, and became in seconds a
seven year old mother for her two younger brothers
I know, nothings new
almost all of my husband's family turned into ashes in the holocaust
and now I know - Amalek is still sticking around

the road is lengthy and winding, but its direction is clear and certain
on this road i cry and fear, pray and believe, wish and hope,
and deeply thank G-d, for giving me the privilege to take this road on, a
few steps forward.

Thinking Outside the Cup

Dedicated to the victims, the struggling, the survivors.

I feel like I'm supposed to have a "take" on this massive earthquake and tsunami. Here I have a soapbox, what am I going to say?

But this is not a current events blog, right? So I can ignore this, right?

But how can anyone ignore a global emergency?

Japan is the epicenter of this, so let's talk about Japan.

There is something I always admired about Japanese culture: the famous zen tea ceremony.

The tea ceremony gives you the diametric opposite feeling to an earthquake/tsunami.

The tea ceremony is all about paying meticulous attention to the finest of details.

How much attention can you pay to pouring a cup of tea?

The tea ceremony trains you to focus intently on the present experience, on this moment and on this place.

The news teaches us to focus on the big picture, on the global scene, on history.

Question #1 for your table: How do you find the right balance between the two?

Answer: As long as you're plugged in to the media stream, it is almost impossible not to be distracted by it. Think about it. Last week someone sponsored a "national day of unplugging". Obviously the idea is inspired by Shabbat.

Question #2 - How would it affect your life if you and your family/friends experienced a "day of unplugging" every week?

PS - Here's a different perspective on disasters that I wrote after the 2008 China earthquake.
PPS - Here is a 3rd reaction to distant disaster, very spiritual, very Jewish.
Posted by Rabbi Seinfeld at Friday, March 11, 2011 1 comment: In 1899, Harper's published a remarkable piece by Mark Twain entitled "Concerning the Jews". A link to the entire article is below, but here is a summary and a question for your table:

I have received from Jews in America several letters of inquiry [that may be summed up by this]: Will a Jew be permitted to live honestly, decently, and peaceably like the rest of mankind? What has become of the Golden Rule?'

Twain begins his answer with a full-disclosure statement:

I will begin by saying that if I thought myself prejudiced against the Jew, I should hold it fairest to leave this subject to a person not crippled in that way. But I think I have no such prejudice. A few years ago a Jew observed to me that there was no uncourteous reference to his people in my books, and asked how it happened. It happened because the disposition was lacking.

I'm not going to print the bulk of his answer to the readers' question, you can click below and savor it yourself. But here is Twain's immortal conclusion:

If the statistics are right, the Jews constitute but one percent of the human race. It suggests a nebulous dim puff of star dust lost in the blaze of the Milky Way. Properly, the Jew ought hardly to be heard of, but he is heard of, has always been heard of. He is as prominent on the planet as any other people, and his commercial importance is extravagantly out of proportion to the smallness of his bulk. His contributions to the world's list of great names in literature, science, art, music, finance, medicine, and abstruse learning are also away out of proportion to the weakness of his numbers. He has made a marvelous fight in the world, in all the ages; and has done it with his hands tied behind him. He could be vain of himself, and be excused for it.

The Egyptian, the Babylonian, and the Persian rose, filled the planet with sound and splendor, then faded to dream-stuff and passed away; the Greek and the Roman followed, and made a vast noise, and they are gone; other peoples have sprung up and held their torch high for a time, but it burned out, and they sit in twilight now, or have vanished. The Jew saw them all, beat them all, and is now what he always was, exhibiting no decadence, no infirmities of age, no weakening of his parts, no slowing of his energies, no dulling of his alert and aggressive mind.

All things are mortal but the Jew; all other forces pass, but he remains. What is the secret of his immortality?

Question for your table: What is the secret of his immortality?

Today's blog is an excerpt from the Amazing Jewish Fact-a-Day Calendar. We are considering an Android version, and maybe one for the new Blackberry Tablet. If you have an opinion about this investment, please click reply and send it along!

Here's the full original article.
Here's a related 1-hour video on the remarkable survival and thriving of the Jewish People.
Here is rabbi Becher's entertaining answer to the question. (If you want to download the mp3 into your iphone etc, click here.)