The purpose of this blog is to take the scenic route at the Shabbat table... Please share...
Mazal tov to Moshe Yitzchak and Goldy (Seinfeld) Steiner on their wedding this week. 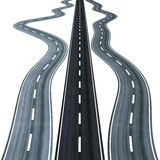 For the above-mentioned nuptials, my sister flew in and out of Washington Dulles Airport, which is southwest of Baltimore.

The shortest drive takes you down I-95 then around the Washington Beltway to Virginia, then due west.

About 21 years ago, in Misgav Ladach Hospital, Jerusalem, 2 babies were born a mere 36 days apart.

Both children grew up happy, energetic, kind... and feeling a pull to return to Israel.

Moral of the story: the shortest distance is not always a straight line.

When wishing someone success in getting married or having a baby, there is a custom to say, "B'shah tovah" - meaning, "May it happen at the right time."
Question for your table - do you believe in fate, luck, neither, or both?

I'm guessing that the readers of this email collectively spend at least $100,000 a year on Amazon. With one easy trick, Amazon will turn that shopping into a $500 donation to JSLI, helping keep our computers humming and programs running. Simply use Amazon Smile, and designate Jewish Spiritual Literacy as your charity — for the same cost to you.

Enjoyed this Table Talk? Vote with your fingers!  Like it, tweet it, forward it....
Posted by Rabbi Seinfeld at Friday, January 24, 2020 No comments: Links to this post