Years after a shipwreck, they found the sole survivor, who had washed up on a lonely island.

The survivor, Mendel Chaimowitz, showed the television crews the home he had built for himself.

When asked to explain another structure, almost identical in appearance to the synagogue, he retorted, “Why, that’s the shul I’d never set foot in!”

So here's the question for your table - What's your favoirte Jewish joke?

Here is a genuine question from the Dear Abby advice column last week:

Dear Abby: I’m planning my son’s bar mitzvah, and my ex-husband hasn’t lifted a finger to help me. I received two small checks for his portion of the guests who will attend the reception.
My question is, should I put his name on the invitation? Or do I just put my name on it since I’m the one hosting and putting the party together? I want to do the right thing, but I also want it made clear that I did the planning myself.

First question for your table - before reading Abby's answer - how would you reply to Mitzvah Mama?

Here's Abby's reply:
A. Dear Mitzvah Mama: Be benevolent. For the sake of your child, include your ex-husband’s name on the invitation. It isn’t necessary to omit it so that you can get the credit. All you need to do is confide in one “yenta” that your son’s father is a “schnorrer” and word will get around. Trust me.

Question #2 for your table: What do you think of Abby's answer?

Want to tell Abby what you think? Here's the link.

(If you want to hear what I think, use the comments section below and let me know.  I'll give you my 2-bits, as my grandfather would have said.)
Posted by Rabbi Seinfeld at Friday, February 17, 2012 1 comment:

The purpose of this email is to provide a conversation-starter for your Friday night dinner table - please print and share.... 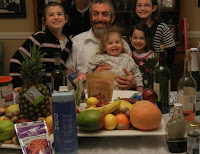 I know I'm not supposed to feed you a lot of carbs. I know that fruit is high in carbs. But this week was Tu-bishvat - the New Year of the trees! It's a mitzvah to enjoy extra fruit!

(Greatest way to break your diet is to make it into a mitzvah.)

So every year at this time I go to Whole Foods Market looking for as many different fruits as I can find. Hopefully, I'll also find something novel.

This year's harvest included: olives, grapes, dates, figs, pomegranate, walnuts, cashews, almonds, 5 varieties of apple, 2 types of grapefruit, 2 kinds of lemon, lime, cacao nibs, pineapple (not from a tree but looks great on the table), red bananas (not strictly speaking a tree but exotic!), mango, 2 kinds of pears, kiwi, prunes, apricots (the only fruit I really don't care for), grape juice and wine, coconut water (drink it cold), capers, maple syrup.... And don't forget chocolate, which after all does come from a tree!

And for a new fruit, I found these wolfberries, AKA "Himalayan goji berries". Allegedly really great for you, this article on wikipedia suggests treating such claims with skepticism. This article may present a more balanced view.

How did they taste? A bit bland. If you are going to try them, I'd recommend them with cereal or in a recipe, or try the chocolate-covered ones. Chocolate always seems to help.

In my book, I describe the ancient Talmudic view that part of our purpose in this world is to enjoy the healthy pleasures that are offered to us. When a person arrives at his metaphorical Day of Judgment, they're going to ask him, "How did you like them Goji berries?"

Now, finally, I have an answer. How about you?

You know, the problem with trying to surprise someone is that the bigger the surprise, the more elaborate you have to deceive them to get them there.

This week, Sunday afternoon, my mom came in for a visit. We'd agreed that we would make it a surprise for the kids.

It would have been easy to do had I just fetched her at the airport and brought her home - surprise!

But for some reason Saturday night I blurted out, "Whoever chooses to be on good behavior tomorrow morning will get to go with me on a magical mystery trip in the afternoon."

Immediately after saying this, I realized my shortsighted error. How could I get them to the airport without them figuring out that we were picking someone up? And who else have we ever picked up there besides Nana?

The next day, I really have no idea what to do, and when 1:30 rolls around and we pile into the car, I have to start improvising.

First, instead of taking the highway, we drive through town.

You know those parts of the city that you're really not supposed to go through?

Where every other house is boarded up?

It's the scenic route.

"Where are you taking us?" they keep asking.

"It's a surprise! Don't you want to be surprised?"

Luckily, none of them have seen this route before, and they were completely unsuspecting.

And I get to show them the two crab take-outs that compete for customers on S. Monroe. 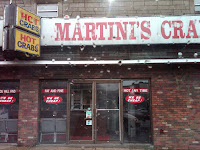 The other claims, "BETTER CRABS THAN THE OTHER GUYS"

However, soon enough they are going to figure out that we were at the airport. How am I going to explain this without telling a lie?

"Really? The airport? How did we end up here?"

"Let's see, maybe I can turn around in here," I said, pulling into the daily garage. "Oh no, this is the wrong way!" I turn around and then continue towards the hourly garage.

Pulling into the hourly garage, someone shouts from the back, "Where are we going?"

"I don't think they'll charge us if we in here for a short time. Anyway, since we're here, I have to go to the bathroom" (which is true).

Goldy will report later that at this point she's started getting frustrated. She has a flute lesson at 3:30 and it looked to her like the entire Magical Mystery Adventure is being scuttled by my disorientation.

"Hurry up, Abba!" she says as I park near the elevators.

"I'm not leaving you all in the car! Come on, we're all going in. Anyway, it would be good to stretch our legs. I think the fastest bathrooms are going to be near baggage claim...."

Down by baggage claim Goldy thinks it's strange that I'm looking at the incoming flight list. "Hmm... look at all these flights coming in from all over the world."

Inwardly, she's telling herself, "Gamzu l'tova, it must be for the best..." but she cannot imagine why I'm acting so bizarrely.

"Abba, we should just go home. We don't have time for the Adventure. Really."

"Goldy, you worry too much."

For some reason, Nana's flight is the only one not showing a baggage area. Gotta keep improvising. I'm counting on them not remembering exactly which elevator we came down. "Come on, let's go this way!" Maybe we'll run into her.

We haven't gone twenty steps when Nana finds us, sneaks up on Goldy and gives her the surprise of her life.

Question for your table: Did it ever happen that you thought you were totally on the wrong track, and it turned out for the best?

PS - Mazal tov to Goldy on her 13th birthday. I teased her that she's now "bar" mitzvah (as opposed to becoming "bat" mitzvah at 12.) If you missed her uplifting Dvar Torah back then, or you want to read it again, click here.

PPS - Ver 2.1 of my iphone app (link below) is now out. If you have a previous version, please get the free update, I think you'll be pleased with the improvements!

Email ThisBlogThis!Share to TwitterShare to FacebookShare to Pinterest
Labels: everything is for the best, gamzu l'tova, surprises, trials and tribulations
Newer Posts Older Posts Home
Subscribe to: Posts (Atom)