Dedicated to the memory of Esther Safer, a regular Table Talk reader for several years, who passed away suddenly in San Francisco at age 25. She will be missed by all who knew her.

I would also like to wish our son Avrami happy 12th birthday today (on the Hebrew calendar)– 1 more year to what my grandmother used to call “the big B.M.”

If you haven’t already, please download our spring newsletter – http://jsli.org


Speaking of birthdays, with cousin Jerry’s birthday coming up next week, I find myself wondering, “What do you get for the man who has, well, everything?”

And it’s a big milestone, too, 55. You know, that’s still the speed limit on many highways to this day.

Then I was thinking, Does he really have everything? How much is ol’ Jer worth these days?

Forbes thinks he’s netting about 500 mil from the franchise.

That’s a lot of bananas.

Whenever I hear about so many bananas, I start to think, Wow, that’s a lot of bananas! Just imagine what you could do with so many bananas! You could buy anything you want! Tired of your computer? Toss it in the trash and get a new one. Tired of typing? Hire someone to type for you at 100 wpm – shoot, you could hire 10 people, each one to type with one finger.

But you know, we all know that there is no correlation between wealth and happiness. The more stuff, the more worries. We know this yet we still pursue it. We want the security. We want the top health care. We want the private midtown Manhattan parking garage for our Porsche collection.

You know what is real pleasure for almost everyone I know? Doing or creating something with your hands.

A few days ago, I was un-flowering our back lawn. I must have pulled hundreds of dandelions until the lawn was a solid beautiful sea of green.

Dandelions are a challenge because you don’t want to pull out any grass, and that root is deep. If you don’t get it just right, it breaks off and the dandelion wins.

So you have to hunt carefully for the exact center. I pulled so many dandelions that whenever I shut my eyes for the next few hours, I kept seeing dandelions in my head.

The next day, I couldn’t believe it. There were so many dandelions in the yard it looked like I hadn’t done anything at all.

It's like trying to uproot a negative personality trait, like a penchant for anger or frustration, or a gossip habit. You've got to get it out at the root, or it just comes back.

But it still felt good, and I’d do it again.

Question for your table - quick survey: What are your top 4 life priorities?

PS – did I mention our spring newsletter? Download it here – http://jsli.org
Posted by Rabbi Seinfeld at Friday, April 24, 2009 1 comment:

Dedicated in honor of Michael Doctor’s 8th Year in remission. “Ad meah v’esreem” - May he live til 120.

Just spoke to someone dear to me who is visiting Cappadocia, the central part of Turkey, a place of marvelous, mystical fairytale landscapes.

She was pleased to hear about all the Talmudic references to Cappadocia. Such as Rabbi Akiva’s recounting his travels there, and the Gentile who asked R. Ishmael to interpret his dream that “my father left me some money in Cappadocia”.

Today there is precious little evidence of 1,000 years of Jewish life in Cappadocia. Yet you can be sure that the Jews who lived there ate unleavened bread on the first full moon after spring equinox.

Next Wednesday is of course our annual Independence Day, the Jewish 4th-of-July.

If you are younger than 84, it will truly a Passover that is different than all other Passovers.

Every 28 years the “Blessing of the Sun” comes along, and the last time this happened erev-Passover was in 1925.

What is the “Blessing of the Sun”?
Why is it only every 28 years?
What does it have to do with Passover?

And since we’re asking all these questions, what’s the secret to a memorable Passover?

What is the Blessing of the Sun
If you want to participate....Wednesday morning, April 8, preferably as close to sunrise as possible, first contemplate how awesome the sun is. If you think about it, it almost defies our appreciation. It’s 1,000,000 times the size of the earth. It’s exactly the right temperature and distance from us for us to live comfortably. It gives us our food. glance briefly at the sun and make the bracha: Baruch Atoh Adonoy Elohaynu Melech HaOlam Osay Ma’aseh V’ray-shees.

It isn’t hard to understand why people of old and late worship the sun. Normally we call the sun “shemesh” which means “servant” - we look at it as no greater or lesser than any of the other phenomena in the world that serve our spiritual mission. Once every 28 years we call it “chama” (hot one) as in “Birchat ha-Chama” to really contemplate its majesty and perfection.

Why 28 years
The Torah says that the sun was created on the 4th day, i.e., Wednesday. Whether you are a fundamentalist and believe this to be literally true, or a modernist and believe this to be figurative, or a skeptic and believe this to be pure mythology, its actually not supposed to be read as history. There’s a message there. The message is that the world was created and didn’t just come to be. I don’t really care what “day” it happened on. But by identifying a specific day, we now have a tangible way of relating to the concept of creation. We can now commemorate its anniversary. 28 years is simply the mathematical fact of a 7-day week and a 365.25-day year – it takes that long for the sunrise on Wednesday morning to appear exactly the same.

On a deeper level...
28 = 7x4. 7 is the number of physicality. 7 colors in the rainbow. 7 notes on a major scale. 7 levels of animal and mineral classification. Etc.
4 is the cycle of exiles and redemptions. That’s why we have 4 cups at the Seder.
Ergo, going through four cycles of seven gives you one complete cycle of physicality-sprituality.

If you think about it, that makes most sense if you experience the entire 28 years. That means that if you’re like me and this is your first meaningful Birkas Hachama, it will be most meaningful 28 years from now, when you complete the cycle again. (Let’s hope we’re still all around then!)

What does it have to do with Passover? Well, I’ve already explained this: 4 exiles, 4 redemptions, 4 cups of wine. Jewish history has been places, and is evidently going places. But it isn’t a show to watch nor a museum to visit. It’s a stage and you and I are actors in’t.


Dramatize your seder. This is the greatest Passover secret, for turning a dream into a memory.

We are such stuff
As dreams are made on, and our little life
Is rounded with a sleep. (The Tempest)

All the world's a stage,
And all the men and women merely players:
They have their exits and their entrances;
And one man in his time plays many parts,
His acts being seven ages. (As You Like It)

(will not be blogging until after the holiday)


PS – If you did not get your free editable Art of Amazement Pesach kit, send me an email. 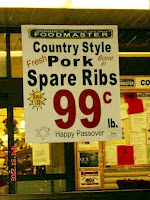