The purpose of this email is to provide something creative for dinner table conversation. Please print and share.
In memory of HaRav Yoseph Shalom ben Rav Avraham Elyashiv who passed away this week in Jerusalem, and in memory of my father, Dovid ben Eliezer, whose seventh yahrzeit was this week. (To dedicate a future Table Talk, send an email.)


What do you do when Truth contradicts Reality?

If you've been reading this blog for awhile, you have learned something every summer around late July about my father....


This week: my father the handyman.

Here's how dad-the-handyman taught me grammar:

Dad (smiling): "Awls? I have awls in the basement."

Our deck had a wall-like fence along one side of it, made of horizontal slats.

One time he decided to build a bench and back-rest along that wall.

He measured. He cut. He leveled.

He was really big on leveling. To him, if something wasn't level, it was just, well, wrong.

But when he had finished, there was one problem.

Evidently the contractor who had built the deck hadn't been so careful with the level.

Dad's perfectly level back-rest was not perfectly parallel to the planks of the wall.

There's a case where Truth (true level) clashes with Reality.

First question for your table: In this case, what do you do? Change Reality? Change Truth? Live with the contradiction?

The answer, in my humble opinion, is that there is Truth, and there is Truth. "Perfect level" is one truth. "Parallel" is another truth. Which is the higher truth? Level or parallel?

That's a good question for your table. Let's make that #2.

I'll tell you what my father did. He decided that in this case the very visible aesthetics of parallel was a higher truth than the more subtle truth of level.

In other words, Dad adjusted the back-rest. 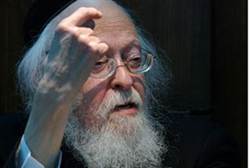 Rabbi Elyashiv, mentioned at the top, was one of those exceedingly rare people who can distinguish between the most subtle differences between competing truths.

Over the past five or so decades, he was asked every manner of question, from life-and-death emergencies to the more benign.

Here's a famous one someone asked him (not the most subtle, but fun for the table):

Jerusalem has a well-known seat belt law. A certain driver picked up a hitchhiker, reminded him to put on his seat belt, but the passenger did not and they were pulled over. The driver asked the passenger to pay the 500 shekel ticket. After all, it was his fault. The passenger refused: "He gave you the ticket, not me!"

They agreed to take the question to Rav Elyashiv.

Questions for your table:
a. How many possible answers are there to this question?
b. How would you answer?

Five people got stuck in an overloaded elevator, they had to be extracted and were fined for the cost of the rescue and repairs. Four of them blamed one of them who, they said, was overweight and came in the elevator last, over the objections of the other four who said it would be too crowded. The fifth person responded that they should all pay equally.

The question came before Rav Elyashiv and he ruled....?

PS - If you want to know how the Rav ruled in each case, send me an email.

Thank you for any other informative web site. The place else may just I get that type of info written in such an ideal way? I have a venture that I am simply now running on, and I have been at the glance out for such info. Friv games 2021 , Minecraft games for the kid , 2player games free